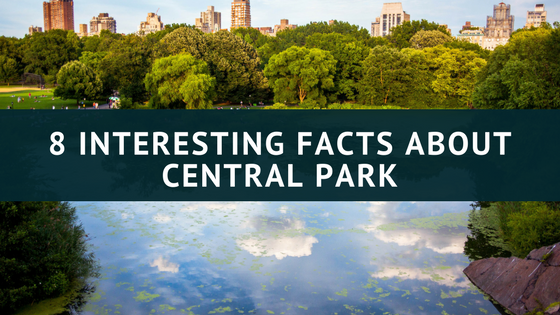 If you are planning a trip to the vigorous New York City, visiting one of the world’s foremost urban parks, Manhattan’s Central Park, would undoubtedly be the one thing that should not be missed on your to-do list. Being the most visited recreational area in the United States, Central Park offers peace and tranquility in the center of a fast-moving city; as well as natural scenic spots and fun-filled activities.

If you would like to find out how great Central Park is, here are 8 interesting facts you need to know.

Central Park was one of those best outdoor venues for huge concerts. But not only that, it is even one of the venue for the largest concerts ever in terms of estimated attendance. That seems quite a fear but the huge space that the park offers was able to accommodate around 980,000 attendees during Garth Brooks’ concert in 1997.

Thousands of years ago, the area where Central Park stands today was covered and surrounded by glaciers. But about 12,000 years ago, the last of them known as the Wisconsin Glacier finally melted away.

But if you’re still in doubt, the large boulders (bedrock) you can see around the park are in fact left there when the glaciers receded and serve as the strongest geological evidence of their existence then.

3) IT’S BIGGER THAN SOME COUNTRIES

Found in the midst of Manhattan island, Central Park covers around 3.5 square miles and stretches across 843 acres of land.

Such dimensions make the park larger than Vatican city and almost six times larger than Monaco.

If that isn’t huge, then we don’t know what is.

Just like the rest of New York City, Central Park has been featured in over 350 films and counting over the years.

That’s why it holds the title of the most filmed public park in the world. Awesome!

While it doesn’t really provide the real comforts of a home, Central Park is considered a real home by quite a few. Based on the U.S. 2010 census, 25 people claim the park to be their home.

But just to be clear, the park’s officials cleared there are no permanent residents in Central Park. Good.

If you want to experience both nature and arts, then New York’s Central Park is the place to be. Do you know that a total of 29 amazing and unique sculptures are found in the area? Yes, and most of these are even donated privately.

Most of the popular ones are that of Alice and Wonderland, sled dog, and Duke Ellington. While a lot of famous authors and poets have sculptures located in the Literary Walk.

To ensure that strolling around the park will be as seamless as possible, transverse roads were built. But it sure was not easy. To make this possible, gunpowder had to be used to blast a solid bedrock.

It is even claimed that more gunpowder was used in this effort than during the Civil War’s Battle of Gettysburg.

What sets this park apart from others out there is that it can now be navigated through an app. Yes, Central Park has its own app which can ensure you won’t get lost anymore. It uses 40 celebrity voices to help recommended around 40 areas of interest.

But if you really want to maximize the experience, taking the Central Park pedicab tours with experienced drivers as your very own tour guides is the best way to go.

So why not join an amazing scavenger hunt adventure in the New York City’s very own Central Park, and make new memories with your families and friends. Just contact us to check the availability of the spots on our daily Central Park Scavenger Hunt Tours.